Márta Pardavi of the Hungarian Helsinki Committee discusses the status of democracy and civic space in Hungary, and Israel Butler discusses how progressive campaigners can grow support for their issues simply by changing how they talk about them.

Civil society organisations (CSOs) make democracy work for all of us. They keep us informed to make sure our governments don’t abuse the powers we've given them. To mark International Human Rights Day, held every December 10th, Liberties is releasing a new guide from our head of advocacy, Israel Butler, on how progressive campaigners counter smear campaigns against them and make sure CSOs are valued and supported by the public.

How can they do this? By changing how they talk about their causes and the issues that matter to all of us. For example, instead of focusing on the problem, or repeating smear attacks, we should be talking about what we have in common and how we can achieve the goals we have and build the societies we want to live in.

This is especially important in counties like Hungary, where civic space has been squeezed and CSOs are under constant attack from the government. Democracy and the rule of law are being crushed by the constant slide towards authoritarianism, and, with an election looming, the government appears ready to ramp up its smear campaigns. Marta Pardavi, the co-chair of the Hungarian Helsinki Committee, discusses the current lay of the land in Hungary and how her organization is using values-based framing to grow support despite the situation in Hungary. 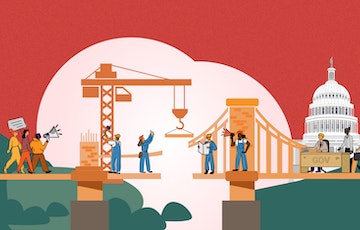