Free, But Not Fair

On each of the last fifteen Tuesdays, we have published a video on how to survive authoritarianism. On most Tuesdays an article too. We wrote about how authoritarians create fear and a constant sense of danger, then limit your rights to “keep the society safe”. We wrote about why they insist that they are still democrats (in fact, the real democrats!), and about how they spread lies to keep themselves in power. We wrote about how to check whether a news piece you come across is trustworthy, and about how we as a community should make sure that people have genuine access to reliable information.

This week, which is the last week of our “Survival Guide to Authoritarianism” series, we write about what happens when our present-day authoritarians in Europe have already limited your freedoms, turned the media into a propaganda tube and taken control of the judiciary - but they still do not feel safe.

They do not formally replace democracy with dictatorship. And chances are that in the foreseeable future they will not try to do so. Such a move would simply be way too risky. It could infuriate too many citizens, and it would certainly grossly annoy the EU. And a grossly annoyed EU is very bad for your budget.

Thus, our authoritarian leaders continue to hold regular elections with a number of real opposition parties competing. But they make sure that nobody else has any chance or winning.

How? Cheating is an option for sure, but European authoritarians normally prefer more subtle solutions, solutions that look at least half-legit on the surface. One of these solutions is called gerrymandering. It means the tailoring the electoral districts according to your needs. Why would it help? Because if you do it well enough, you can win a clear majority in the parliament even when your opposition has way more voters. Like here: 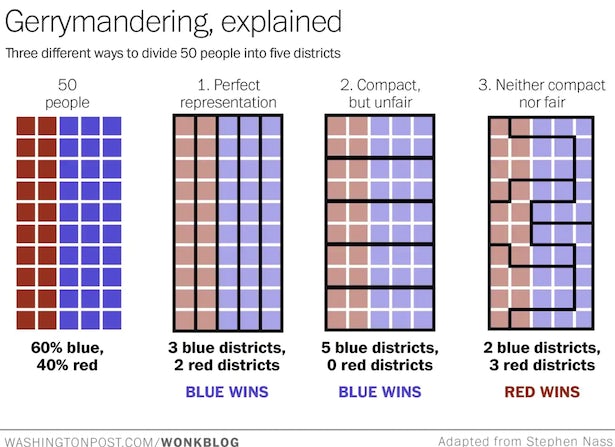 The Hungarian Fidesz party, experts say, seems to have already done this a few years ago. But they have not stopped there. They also reduced the level of proportionality of the system - so that the opposition does not get compensated for the votes they “lost” in the aptly redrawn single-member constituencies. They introduced rules that make cooperation between opposition parties extremely difficult. They made the enforcement of those electoral rules the enforcement of which would happen to be advantageous to the opposition parties very complicated. At the same time, they made sure that those rules that could be disadvantageous to their competitors would be strictly enforced. As a result, although the elections in 2014 and 2018 were free, they were very far from being fair.

Other authoritarians in the region are somewhat behind - but they will surely follow. Poland’s PiS party is already following in Fidesz’s footsteps. In 2017 they introduced a massive change to the electoral law. From 2019 on, the National Electoral Commission, the body responsible for overseeing basically everything elections-related, will no longer consist of judges. Instead, the majority of the will be appointed by the PiS-dominated parliament. Notably, after the upcoming parliamentary elections, they will have full authority to redraw electoral boundaries.

If you want to prevent your country from going down on the drain too, do vote on the European elections. The EP cannot prevent member states from taking an authoritarian turn. But if you make sure that progressive forces dominate the EP, it can certainly make any authoritarian turn too painful to attempt. For example, by making certain EU fundings conditional on respecting EU’s basic values.

PS: Although our authoritarianism series ends here, in a few weeks we will start one on democracy and the European elections. And we will soon interview our favorite authoritarian on his short-term plans. Stay tuned.