The Polish government has accepted more than 140 of the 180 recommendations it was given on rule of law, anti-discrimination and freedom of speech.

This was the third time Poland has undergone the Universal Periodic Review procedure. Unlike previous reviews, however, this year’s review, held on September 22, included recommendations concerning the protection of foundations of a democratic state ruled by law.

The ongoing constitutional crisis and the independence of the judiciary were among the key subjects discussed in the recommendations. The Polish government accepted the recommendations but argued that any changes to the functioning of bodies such as the Constitutional Tribunal had been introduced in compliance with the Venice Commission’s opinion and in accordance with international standards.

Similar statements were included in the government’s report submitted to the Human Rights Council at the beginning of this year. In the report, the government noted that "the freedom of expression and freedom of mass media are some of the fundamental principles enshrined in the Polish Constitution. We are currently considering launching additional works to improve the pluralism of the media and improve access to measures of mass communication."

However, the report did not reveal how many journalists have been dismissed from public media outlets since January 2016 and did not present any precise description of the direction of planned reforms.

One of the key issues that appeared in the recommendations for Poland was the combating of discrimination and hate crimes. The government did not accept the recommendations that called for re-establishment of the Council for the Prevention of Racial Discrimination, Xenophobia and Related Intolerance, claiming that the Council’s powers had been acquired by other administrative bodies.

The government did accept the recommendations regarding the combating of hate crimes, which suggested the extension of the catalogue of hate crimes by adding the offences motivated by homophobia and transphobia.

The government also accepted the recommendations to follow up on policies for the rights of persons with disabilities and implement ECtHR judgments on access to abortion.

During the session, the HFHR presented a statement in which it noted the ongoing constitutional crisis, threats to the independence of the media and the shrinking operational space for civil society.

In the statement, the HFHR expressed hope that the accepted recommendations will be properly reviewed and implemented by the government. On the other hand, the organisation stated its concerns about the process of "democratic backsliding" in Poland and the resulting rule of law crisis.

The statement of the HFHR can be accessed here. 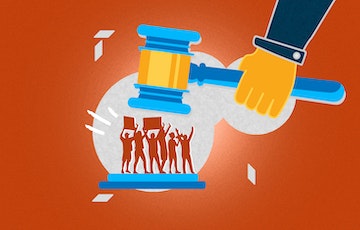 ​SLAPPs In Europe: How The EU Can Protect Watchdogs From Abusive Lawsuits