Human rights, justice and the rule of law are core values on which the EU is founded. The Spanish government has adopted a package of legal reforms that severely undermines these principles. Ask the Commission to take action to protect European values!

Systemic threats to the rule of law in Spain

The financial crisis has seen an increase in people using freedom of assembly. The public has relied heavily on this fundamental right to express its opposition to, or to call for, reforms. Demonstrations have been used to oppose: austerity measures, such as cuts in spending on health care and education; repossession of homes by banks and the sale of toxic financial products; political corruption; and proposals to reform rules regulating abortion. Since the start of the financial crisis (2008), the number of demonstrations has increased 283%.

Demonstrations have also been used to demand greater transparency and public participation in decision making and to oppose limitations on the rights to freedom of peaceful assembly and expression. These public protests have occurred, among other places, outside government buildings, officials’ residences and banks, as well as in private homes to prevent evictions. The government initially attempted to restrict and deter the public from peaceful protest through the use of criminal charges and the imposition of administrative fines. However, individuals began to successfully challenge these measures through the courts.

The financial crisis has also led more people to use the courts to defend other rights, for example the right to housing as many fight evictions, or the right to property as they try to recover savings invested in toxic financial products. Applications for legal aid have greatly increased during the last years. The government has reacted by making it more difficult for individuals to use the courts to defend their rights against the authorities and big businesses. New laws seek to weaken the judiciary by reducing its effectiveness and independence, and to make it more difficult for individuals to take cases to court by creating financial barriers, such as restrictions on legal aid in order to ensure that fewer people are eligible for this essential public service.

Some of the new laws have already been adopted, while others are still being negotiated. Taken collectively, this package of measures seriously undermines the rule of law:


A proposed Legal Aid Act prevents individuals from getting access to justice and effective judicial review by severely restricting access to legal aid.

The new thresholds included in the proposed law mean that a considerable part of the population will no longer be eligible for legal aid, even though they cannot afford to go to court to defend their rights. Another indicator evidencing Spain’s lack of commitment to making its judicial system accessible is evidenced in the budget allocated to the legal aid system: Spain spends 0.80 euros/per inhabitant while the European average stands at 8.63 euros. In the last years, between 25% and 35% of citizens have been deprived of their right to access to justice.


A Court Fees Act, in force since 2012, is discriminatory because it has a disproportionate impact on smaller companies compared to big corporations, such as banks and insurance companies.

Partial reforms in 2015 to the original act have failed to solve the problems created by the introduction of court fees. Individuals who paid court fees between December 2012 and February 2015 in order to litigate to protect their rights will not be reimbursed. Individuals who lost their right to litigate because they could not afford to pay court fees will not compensated. The money collected from court fees (approximately 540 million euros) has not been allocated, in general, to the justice system or for the provision of the legal aid service.

The justice system is overwhelmed and under-resourced. This is creating long delays in court proceedings, which further undermines the right of access to justice.

The government has proposed reforms to the Organic Law of the Judiciary and the Criminal Procedure Act to address the lack of resources. However, these measures are too limited and piecemeal. What is needed are comprehensive reforms that restructure and modernize the judiciary, in addition to sufficient human and financial resources. In fact, the budget allocated for the courts (in euros per inhabitant) drastically fell between 2010-2012 (from around 90 euros/inhabitant to less than 30 euros/inhabitant) and is among the lowest in Europe. The justice budget continued to decrease in 2013 (by 4.21%) and 2014 (by 2.13%). Spain is also among the European countries with the lowest number of judges per inhabitant (around 10 judges/100,000 inhabitants) and scores poorly on perceived judicial independence.

The lack of resources also weakens the capacity of the judiciary to balance the powers of the executive and legislative branches. A 2013 reform of the Law on the General Council of the Judiciary Power, combined with a practice of political interference, further threatens judicial independence.

The recently adopted Citizen Security and Public Safety Act and the Criminal Code include overly broad and vague provisions that could grant an excessively wide margin of discretion to the authorities and lead to arbitrary application of criminal and administrative sanctions. These laws threaten the rights to freedom of peaceful assembly and expression, essential pillars of a democratic and pluralistic society. UN special rapporteurs have expressed concern that these reforms, which threaten to violate fundamental rights and freedoms, could have been a response by the Spanish government to the numerous demonstrations that have been carried out in Spain in recent years.

The process through which the package of reform proposals is being adopted conflicts with another basic value inherent in the rule of law: “a transparent, accountable, democratic and pluralistic legislative process.” The government has not engaged in adequate consultation with stakeholders, including civil society and human rights experts, nor has it given due consideration to their views. Many of the proposed reforms outlined above are formulated in overly vague and broad terms, undermining the principle of legality.

The new EU Framework to strengthen the Rule of Law

Human rights, justice and the rule of law are intrinsically linked and constitute core values on which the EU is founded. Any attempt to attack these values, which all EU countries are obliged to uphold, undermines the mutual trust between the member states required for the EU to function, as well as the commitments made by national governments and the Union towards its citizens. The European Commission has affirmed that “in cases where the mechanisms established at national level to secure the rule of law cease to operate effectively, there is a systemic threat to the rule of law and, hence, to the functioning of the EU (…). In such situation, the EU needs to act to protect the rule of law as a common value of the Union.”

To this end, the Commission has set out a new framework to safeguard the rule of law against systemic threats. This new framework is complementary to other existing mechanisms and seeks “to enable the Commission to find a solution with the Member State concerned in order to prevent the emerging of a systemic threat to the rule of law (…) develop into a ‘clear risk of a serious breach’ within the meaning of Article 7 TEU.”

The basic and guiding principles of the rule of law set out in the EU Framework to strengthen the Rule of Law include: (i) access to justice and independent and effective judicial review; (ii) non-discrimination and equality before the law; (iii) separation of powers and judicial independence; (iv) legal certainty and respect for human rights; and (v) a transparent, accountable, democratic and pluralistic process for enacting law.

EU principles and values are threatened in Spain. Raise your voice and ask the European Commission to take immediate action to intensify scrutiny of the situation in Spain and undertake an assessment under its framework on the rule of law. 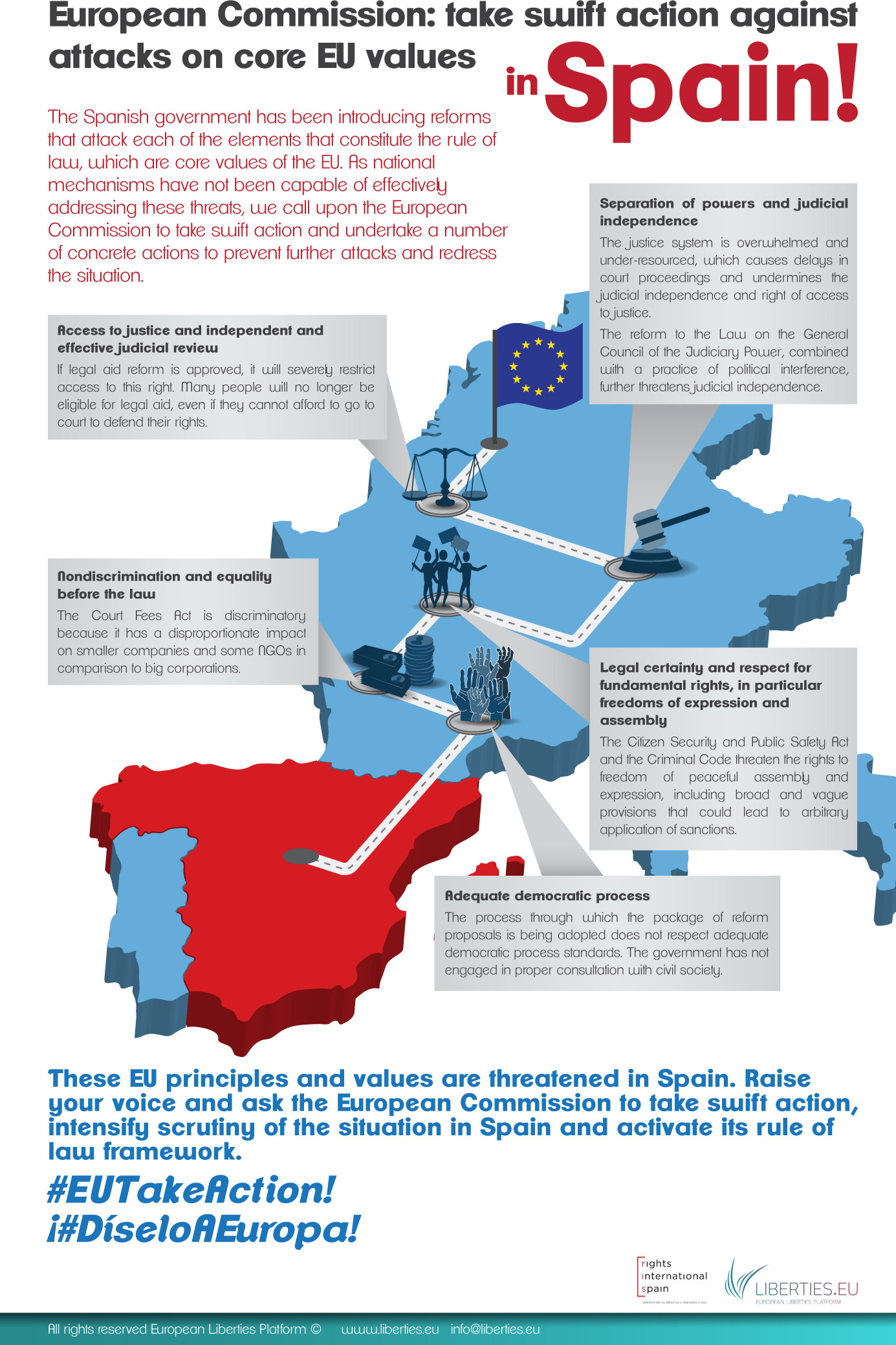 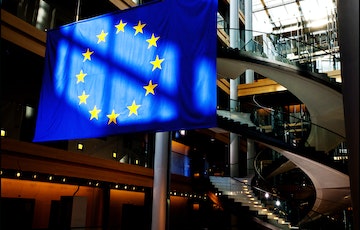 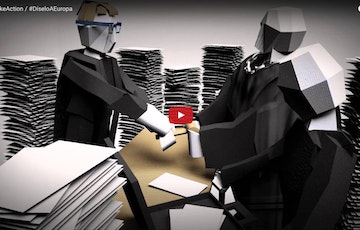 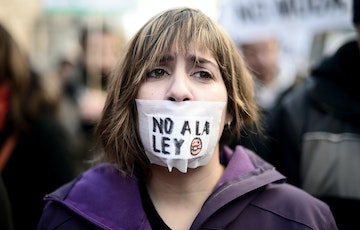 Exercise Your Rights to Defend Them - A Reminder From Spain