'Are You Crazy?': Czech Police Arrest Man for Lack of ID Card

Police have the right to request proof of identity in many circumstances, but Czech law says that you are not required to produce it on the spot.

Czech police officers were videotaped handcuffing a man who refused to provide an identity card in Prague on April 23. "What have I done? Are you crazy?" the man can be heard shouting.

The Czech police are under the impression that everyone must carry an identity card all the time, which is no longer true. Czech Justice Minister Robert Pelikán confirmed that there is no law requiring a person to always have an identity card with them.

"I see no reason for such a police action in this case. It seems that the police are still ignoring the law, which states that they should have good manners, primarily," said Czech Justice Minister Robert Pelikán on Interview ČT24, a television news show.

No ID should be no problem

Police have the right to request proof of identity in many circumstances, but you are not required to produce it on the spot. "Ideally you have an identity card, of course. If you do not, however, the policemen are obliged to provide the necessary assistance to enable you to identify yourself," said Pelikán. 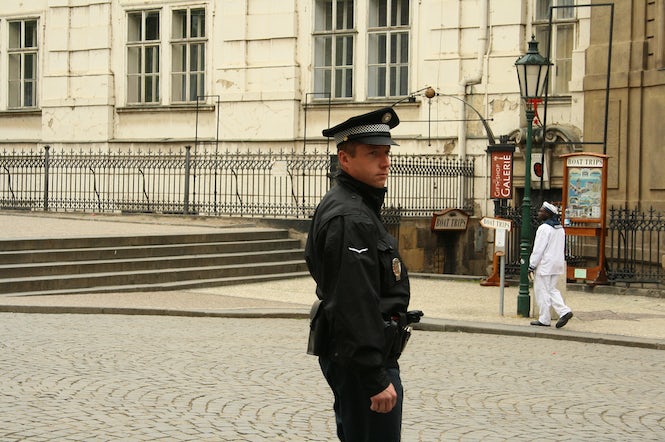 Police can, for example, have a photo of the concerned individual sent from a database to a cell phone, thus verifying that person's identity. They may also ask the person specific information of a personal nature, which probably only he knows, such as mother's maiden name, which can be verified by phone.

Only in cases where this procedure fails do the police have the right to bring the person to the precinct, according to the justice minister. At the station, further identification attempts can be made, but this process may not exceed 24 hours.

The police, however, deny any wrongdoing of its officer in this case. Police spokesperson Tomáš Hulan of the Regional Police Directorate in Prague said that the officer initially woke the sleeping man, and then asked him to present his ID.

"The policeman asked him, saying specifically: 'In the name of the law, submit your proof of identity, otherwise you will be brought to the Karlín precinct office to prove your identity. Coercive means may be used against you, if you resist,'" Hulan said.

Minister Pelikán stated on Czech Television that the conduct of police officers should be a subject of public debate. "We appeal to the police to behave differently," said Pelikán.