Liberties joined a group of rights defenders calling on the European Council to clearly state what is expected from the Hungarian and Polish authorities to remedy the long list of human rights and rule of law violations.

Independent judges, free press and rights groups ensure that elected representatives work for the benefit of their people. They do this by keeping the public informed of the choices our leaders make, allowing people to organise and communicate their concerns to politicians, and making sure governments don’t overstep individual freedoms. The ruling parties in Hungary and Poland are intimidating and silencing these institutions so that they can hold on to power and pocket public resources for themselves instead of funding the services their communities rely on. To stop the public uniting to demand that their leaders fix the economic and social problems they’ve created, the two regimes spread hatred among their own people, pointing the finger at people who migrate, LGBTQI persons, or women asking for equality.

EU Affairs Ministers of all EU countries are preparing to discuss on 14 December the continued deterioration of democracy in Hungary and Poland. Ahead of that meeting, Liberties has joined a group of organisations representing academics, journalists and human rights defenders across the EU, including Liberties’ members in Hungary and Poland, to call on EU governments in an open letter to play their part and help the people of Hungary and Poland regain their democracy and their freedoms.

The EU must fulfil its role

The whole point of the EU is to improve its people's wellbeing. That’s why all governments agreed to put in place standards and institutions that make sure governments act in their people's best interests. To enforce this, the EU Treaties provide for the possibility to sanction governments that attack democracy, the rule of law and people’s rights and freedoms.

The European Parliament has been vocal in highlighting, condemning and calling other EU institutions to react to the various steps taken by governments in Hungary and Poland to dismantle their democracies. The European Commission has also taken the Hungarian and Polish governments to court over some among a long list of measures break EU standards.

EU governments in the Council have so far tiptoed around the issue, holding hearings and hosting discussions that haven’t led to action. Dialogue and peer pressure hasn’t led to any improvements. Instead, it’s encouraged the Hungarian and Polish governments to pursue their authoritarian agenda, knowing they can get away with it.

It's time for action

Support our campaigns protecting democracy Donate
EU governments today have another chance to use the sanctioning powers they gave themselves to protect citizens against regimes that attack their democratic rights and freedoms. Liberties has joined other rights groups in the attached letter urging EU governments to take action.

You may also be interested in the new edition of our yearly report reviewing the democratic records of EU countries, written together with our members, coming in early 2022. 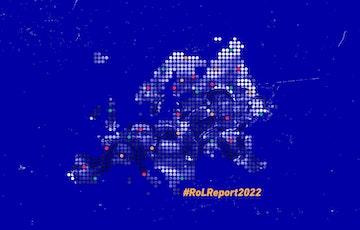