Providing context from a human rights perspective for the Twitter-Musk thread.

1. I see a lot of people venting about Musk buying Twitter. Why is everyone freaking out?

There are a number of reasons. Musk has declared himself a “free speech absolutist” and indicated his intentions to minimize content moderation on the platform. On the one hand, this is nonsense because we have rules for moderation and Twitter would be liable for not removing things like hate speech or other unlawful content.

On the other hand, and what is more worrisome, it could put millions of people at risk and increase the likelihood of Twitter being used as a tool to incite violence, hate, and harassment.

And then there are the ethical questions that arise from this, for instance if Musk would undo efforts Twitter has taken to combat harmful content, such as COVID misinformation?

The sale raises serious concerns around data protection and users’ ability to control access to their private information, such as their private messages on Twitter. Twitter is not well protected: there’s no end-to-end encryption that we are aware of, for instance. This is an existing problem that many privacy organizations have been vocal about.

Twitter should take immediate steps to address shortcomings, including allowing people to delete their direct message history. The sale heightens concerns because it would make Twitter a private company, thus lacking the transparency and accountability of a firm that is publicly traded.

3. What are the main issues in Musk’s bid to buy Twitter from a human rights perspective?

One powerful actor having so much control over the boundaries of our online political speech is cause for concern. Twitter and other social networks play an increasingly important role in social and political discourse. With Twitter such a large and well-used hub of public discourse and debate, it’s dangerous to put full control over such a forum in the hands of a single person.

The sale of a public space that we rely on to communicate, share ideas and learn new things could have far-reaching consequences. Imagine it is not Musk who aims to buy Twitter but a Russian oligarch – how differently would we be reacting? And let’s keep in mind that we know next to nothing about Musk’s true intentions, and he hasn’t shown that he actually understands the legal boundaries of free speech.

Musk’s recent public statements only reinforce concern. Reinstating Twitter accounts based on his personal beliefs, without a proper mechanism, would create a non-transparent and biased environment where he alone decides – unpredictably, and without accountability. His vow to reinstate Trump’s account is an example.

4. Which future scenario is most favorable from a human rights perspective?

For Twitter to remain an important space for public debate, with guarantees to respect free speech, transparent rules on moderation, and clear accountability of the new management. Stronger data protection safeguards are needed too.

Fundamental rights groups would like Twitter to appoint an independent human rights chair and a board committee accepting reports directly from the human rights team. It should also publicly disclose what human rights due diligence was conducted before agreeing to the sale, and how the Board concluded that the company will be able to meet its human rights responsibilities under Musk’s ownership.

5. What is the regulatory framework in Europe that addresses the human rights concerns, including the threats to free speech, of Musk’s bid to buy Twitter?

There is the GDPR, which imposes strict data protection rules on companies offering services for Europeans. Also, the European Parliament is about to sign off on a new regulation called the Digital Services Act, or DSA. With the DSA, the European Commission will supervise very large platforms and have the ability to impose sanctions of up to 6% of global turnover or even a ban on operating in the EU single market in case of repeated breaches of EU regulations.

New measures to empower users and civil society include:

6. Sounds like the Digital Services Act (DSA) is a magic wand to protect free speech on social media in Europe. Does the DSA have power outside Europe?

No, it does not, but it has power over services offered in Europe. This goes back to what was mentioned earlier: will the Twitter we use in Europe be very different from, say, the Twitter available in the United States? It’s an open question. But what we can say for sure is that the strong regulations the EU will impose will have no force outside the Union. They will, however, serve as an example for US lawmakers as they consider how to regulate Big Tech. 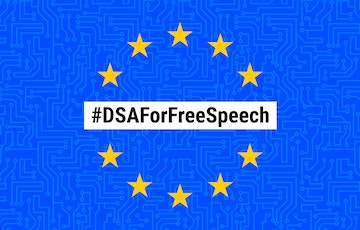