Restrictions on the right to protest, free speech, access to information and freedom of association. This is how governments across the EU took political advantage of the pandemic. Read details in the Liberties-Greenpeace joint report below.

by Liberties and Greenpeace European Unit

In other cases, governments are deliberately taking advantage of COVID-19 to undermine individual freedoms and democracy in ways that actually endanger public health. In particular, they imposed unnecessary and disproportionate restrictions on the right to protest, free speech, access to information and freedom of association.

These rights are essential as they provide citizens with the tools they need to ensure that their governments act in their best interests when navigating the pandemic.

Whilst not claiming to be exhaustive, this report records some of the most striking developments in EU countries. It exposes how governments’ responses to the pandemic have led to unnecessary and disproportionate restrictions on civic space and freedoms, unduly hampering activism and democratic participation.

Worrying trends across the EU

While certain countries stand out, worrying trends concern several states across the EU. Evidence compiled shows that more than half of EU countries failed to safeguard people’s right to peaceful assembly. Instead of putting measures in place to enable people to protest while protecting public health, governments misused physical distancing rules to create blanket or quasi-absolute bans on peaceful demonstrations – as reported, for example, in Belgium, France, Germany, Italy, Romania and Slovenia.

Those who nevertheless claimed that right were subjected to invasive surveillance (such as in Slovenia) and hefty sanctions (such as in Belgium, Germany, Greece, Italy, Slovakia or Spain). Several peaceful protests were violently disrupted by police, as reported, for example, in France and Sweden. In a number of countries, tight restrictions on assemblies have remained in place even when social distancing measures began to be scaled back and malls, shops and restaurants opened again. It is the case, for example, of Romania, where the ban on assembly is still in force.

In many states, expedited law-making and changes to parliamentary procedures have severely limited opportunities for citizens, activists and civil society organisations to have their say on governments’ actions. Examples illustrate this trend in countries like Germany, the Netherlands, Poland, Romania, Slovenia and Spain.

The emergency situation was also taken advantage of by certain governments, in particular in Hungary, Poland and Slovenia, to further weaken environmental and rights standards. At the same time, restrictions on the right to access public interest information made it more difficult to scrutinise how authorities have been using their reinforced executive powers – as reported for example in Austria, the Czech Republic, Hungary, Italy, the Netherlands, Romania and Slovenia.

This repression of democratic participation was exacerbated in some states by a veritable crackdown on freedom of expression. In a number of countries governments tried to use the need to prevent the spread of misinformation as a pretext to censor free speech, with Hungary and Romania as the most staggering examples, which Bulgaria attempted to replicate.

Authorities also reportedly refused to engage with journalists, activists and civil society organisations, sometimes even discrediting, and harassing them when they questioned or criticised governments’ actions. Worrying episodes of smears and threats were reported in particular in Slovenia.

In a number of countries, these pandemic-related restrictions are merely the latest in a series of measures governments have put in place over recent years, which already revealed a dangerous rollback of civic freedoms and democratic participation across the EU.

Some national governments instrumentalised COVID-19 to accelerate their efforts to inhibit activism, limit the people’s ability to participate in their democracy and hamper the work of watchdogs such as civil society organisations.

Unfortunately, early warnings by international monitoring bodies from the UN and the Council of Europe and by watchdogs turned out to be justified also in the context of the EU. The fact that our governments failed to safeguard civic freedoms to the extent possible is a cause of concern, and particularly worrying during a pandemic, when the public needs tools of civic engagement to ensure their representatives are doing their best to protect their health.

Citizens look to the EU to help their governments bring citizens through the pandemic as safely as possible. Many EU leaders have recognised that the EU needs to do more to prevent populist authoritarians capitalising on public discontent to stoke Euroscepticism. But it is equally important for the EU to safeguard civic freedoms across its member states, and to act strongly against those governments that exploit the crisis to silence critics and erode democratic checks and balances.

We, Greenpeace Europe and the Civil Liberties Union For Europe, suggest in our report that EU institutions should use the options available to them to restore and promote civic space and freedoms — so that citizens can ensure that their governments answer to and work for them, during the pandemic and beyond. 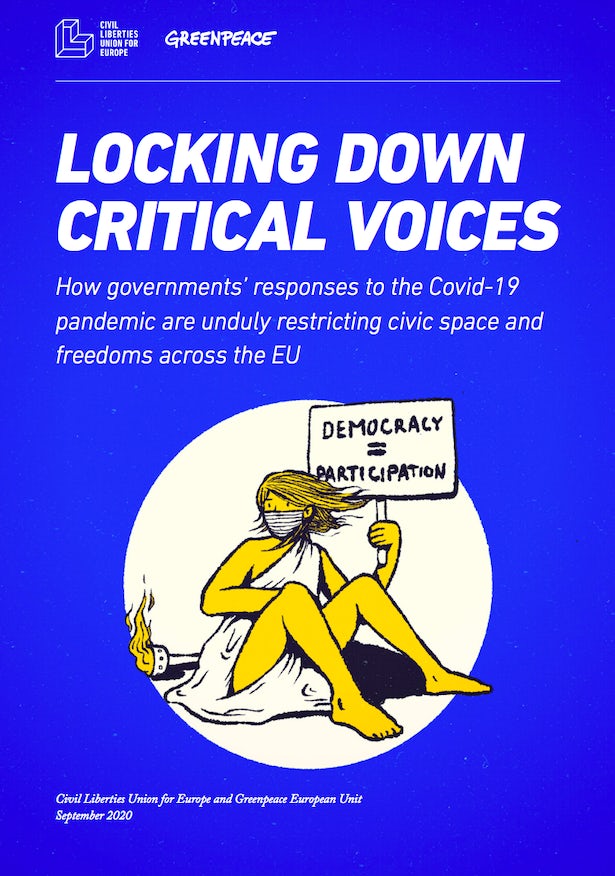