​The emergency law passed in Hungary is another step in Orbán’s plan to get rid of democracy and the rule of law. Here are 5 things the EU could do to counter it and help Hungarians restore their democracy. The tools are there, just not being used.

The European Commission is the guardian of EU norms and values and can launch infringements against EU countries who violate them, bringing them to the EU Court. It has already used this power to address some of the laws Orbán came up with to crack down on rights groups. Yet, it fell short of prompting the EU Court to take urgent measures to avoid irreparable harm and decided not to act on other seriously problematic issues including the so called “special immigration tax” – which is nothing but a severe restriction on the freedom of speech and on the day-to-day work of rights groups. Now it needs to get braver, and quickly.

Hungary’s emergency law violates EU rules in at least two ways, which could allow the European Commission to take action against it.

The threat of imprisonment for journalists and activists will dissuade media outlets, journalists and activists from working in and on Hungary. That violates internal market rules, in particular the right to take up and pursue activities in any EU countries in a stable or temporary way (freedom of establishment and freedom to provide services). Because these measures fall under EU law, the emergency law will also violate provisions in the Charter of Fundamental Rights concerning freedom of expression and information.

Orbán's sweeping powers would also allow him to override EU law at national level, in violation of the basic EU law tenet according to which EU law must be held superior to national laws. By preventing any by-elections for an indefinite period of time, the law may also prevent citizens exercising basic rights granted to them under EU law, such as the rights to stand and participate in EU and local elections.

2. Cut the money off

Orbán relies heavily on EU money to fund his oligarchs. Stopping the cash would make it harder for him to command their loyalty. The European Commission proposed to cut EU funds for countries having serious rule of law problems. Governments in the EU Council and the EU Parliament need to knuckle down and adopt this proposal.

In the meantime, the European Commission could use the powers it already has, to suspend EU structural funds for governments that don't have proper guarantees in place to make sure it's spent legally. Alternatively, the Commission could suspend the flow of funds on the basis of rules on sincere cooperation. It couldn't get much clearer that Orbán is willing to actively working against one of the EU’s main objectives, which is to promote EU values such as democracy, the rule of law and human rights.

Although top-down political pressure is important and necessary, it's not possible to protect democracy, rule of law and human rights unless they also have grassroots support. The future Rights & Values programme would allow the EU to support rights and democracy groups educate and mobilise the public to resist attacks on democracy and civil liberties. Sadly, the budget proposed by the European Commission is way too small to give rights and democracy groups the support they need. It's going to require a budget more in line with the 1.8 billion EUR package suggested by the EU Parliament.

4. Get serious about media freedom

The EU often restates its commitment to defend media freedom and pluralism. But the monitoring tools and expert discussions it tends to favour have not saved Hungary’s independent media from Orbán’s crackdown. There are many concrete things the EU could do which could make a difference.

5. Move to the next level on Article 7

Article 7 of the EU Treaty allows for serious political and economic sanctions to be imposed on EU countries breaching EU values. After the European Commission showed itself unwilling to do so, the EU Parliament triggered the procedure against Hungary in September 2018. Discussions, however, have been dragging in the EU Council, leaving Article 7 a dead letter. The European Commission should take a firm position and back the European Parliament’s proposal with evidence-based analysis, as it has on Poland. And governments should stop talking and start voting, to identify sanctions that will make Orbán think twice. Compromising has not put the brakes on the destruction of democracy.

What if the EU lets this one go, too?

A lot is wrong with Hungary’s emergency law. The law enables Orbán to rule by decree without parliament oversight and to arbitrarily suspend certain laws. The state of emergency has no cut-off date and the government can extend it by itself indefinitely. The law also introduces a new criminal offence allowing it to imprison journalists and activists that criticise the government.

The emergency law was met with deep concern by civil rights groups in Hungary. The coronavirus brings a lot of challenges to society and, as we already explained here, the only way to navigate the pandemic is for people to be able to use their rights to demand the best choices and use of public resources from the government. By limiting democracy and civil liberties the government is removing from the public the very tools that allow it to demand effective solutions during the pandemic.

Given Orbán’s progressive erosion of democratic norms during his 10 years in power, it is no surprise that, just days after the draconian law was approved, Hungary’s government is already pressing ahead with authoritarian measures to further quash dissent and restrict human rights. Orbán is ready for a new clampdown on the last remnants of independent media and has made an attempt to take powers away from mayors – the only political positions opponents have been able to win, after Orbán’s party rigged national elections. Orbán is not even trying to hide the that he will use the emergency law to whip up hatred towards minority groups – a bill is on the table that would, among other things, ban legal gender recognition for trans people in Hungary. And that’s just the first week since the law was passed.

The Council of Europe, the United Nations and the OSCE have publicly expressed their serious concerns about Hungary’s emergency law. What about the EU?

The President of the EU Parliament and some EU Member States’ leaders have criticised Hungary, including Germany's Europe Minister. Germany will take over the Presidency of the EU Council in a few months. This makes it less unlikely that we could see developments on Article 7 compared to other EU presidencies like the Bulgarian and Croatian.

On the other hand, the 16 governments that signed a joint declaration expressing concern about “certain” emergency measures were still too scared to name Hungary. And Orbán poked fun at their fear by later signing Hungary up to the declaration. Not great prospects for Article 7, then.

A statement by the EU Commission’s President Ursula von der Leyen on emergency measures was also directed at Hungary, but again did not dare name it. One wonders whether this means that the EU Commissioner for justice and rule of law Didier Reynders, who said he is assessing Hungary’s emergency law, really enjoys his boss's backing.

Will any efforts by the EU be yet again frustrated by political games? Orbán is still a member of the European People’s Party (EPP), the biggest of the political groups. Von der Leyen – as former Commission President Juncker – belongs to this group too.

And could Orbán exit the EPP? There's serious disquiet within. But the EPP doesn't want to lose the seats in the European Parliament. Perhaps an agreement between the EPP and other major political groups within the EU Parliament - for each of them to ditch their bad apples, meaning no one profits - might do it. But that could be difficult to broker. 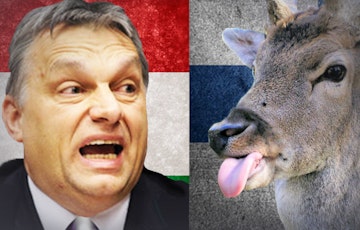 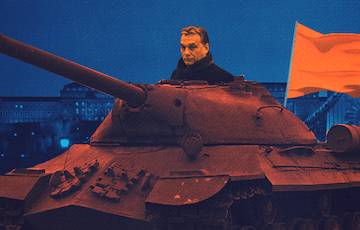 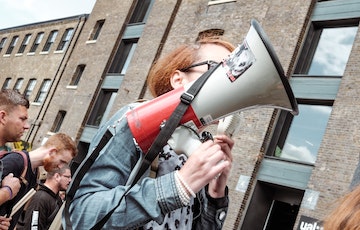 100,000 March Against Threats to Basic Rights and Democracy in Hungary