The razing of a migrant camp outside Rome, carried out with no warning, has attracted strong condemnation from human rights groups, but also gestures of solidarity and compassion from Roman citizens for those who had called the camp home.

At around 9:30 on the morning of May 11, bulldozers and police in riot gear came to clear the migrant camp in Ponte Mammolo, in the eastern suburbs of Rome. They arrived with no forewarning and the slum's inhabitants didn't even have time to gather essential personal belongings like clothing, money, papers and medicines.

The Rainbow Camp, as the Ponte Mammolo camp was often called, hosted about 400 people of various religions and nationalities, living together in peace for decades. Most were Eritrean and Somali refugees, and many of them had fled to the camp for fear of being held by the police and identified. According to the Dublin Regulation, immigrants must be identified once they arrive in Europe, and they have the obligation to apply for asylum in the first country where they set foot.

But those from the Rainbow Camp wanted to leave Italy to be with relatives and friends waiting for them in northern European countries, so they hid from authorities. They became "invisibles," people we pretend not to see, who live at the edges of our cities, without rights and without dignity.

The ramshackle dwellings of Ponte Mammolo were also home to people who have been in Italy for so long that they had already gained a legal status—permanent residents or, in some cases, Italian citizens. But now they’ve lost everything, including their hard-earned documents.

Some of them were placed in help centers around the city, while others stayed at houses of friends. But 100 of them refused to leave. They moved to a parking lot next to the crushed encampment, where they set up some tents offered by people of the neighborhood and a sports equipment shop. Indeed, the solidarity of the Roman people was immediate. Many continue to bring food, blankets and clean clothes. Everyone is lending a helping hand.

Roman authorities, through the municipal councilor in charge of social issues, Francesca Danese, let it be know that the clearing was decided on because the situation was unsustainable, especially due to major health and hygiene issues in the camp. But human rights organizations complain that there was definitely a better way to deal with the problem. They've worked for years to find a fair housing solution for those people.

There have been many recent meetings between migrant associations, NGOs and local authorities in order to agree on a real plan of social integration, considering the different cultural features of the various groups of inhabitants. But the clearing operation was so sudden and unexpected that any attempt of at mediation was futile, and its outcome has been paradoxical, because many ended up in the streets, living, if possible, in worse conditions than before.

We spoke to Alberto Barbieri, president of MEDU (Doctors for Human Rights), a partner of Antigone on many projects, who was inside the camp when the clearing occurred. He said:

"There are six things not to do during an evacuation: to proceed without finding alternative solutions for all dwellers, especially for the most vulnerable ones; to come along hastily without notifying the dwellers of the plan; to give people 30 minutes or less to gather their belongings; to threaten, intimidate and assault dwellers and humanitarian operators; to dismantle lodgings while there are still people inside, including sick people and children; to destroy shacks probably made of asbestos without any kind of precaution. All this happened at Ponte Mammolo, and now we want to know who’s responsible."

Last February, Pope Francis made a surprise visit to the camp in Ponte Mammolo. He said a prayer in Spanish with many South American children who used to live there, and left words of hope for all. A hope that even the bulldozers can't destroy. 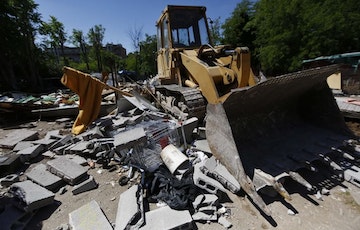 Scene of Disaster: Bulldozers Raze a Migrant Camp in Rome 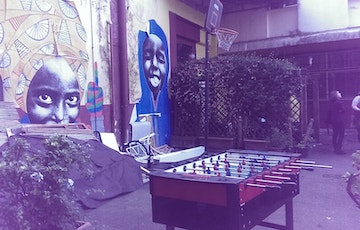 Life Inside an Italian Transit Center: One Day at the Baobab 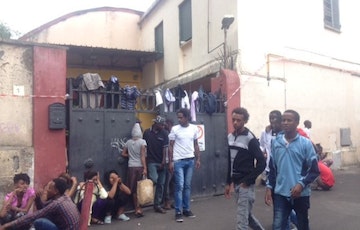 Italians Volunteer to Welcome and Care for Migrants