Covid restrictions have created a dangerous climate of arbitrariness and mistrust, resulting in a sick society. Authorities must implement measures that help fight the pandemic without taking away basic freedoms.

Last week, the Belgian Minister of the Interior announced a “Pandemic bill”, the aim of which is to provide a legal basis for lockdown measures that have already been used and in case a similar situation arises in the future. Even though the content of the bill has not been made public, it is very likely to go include a legal pathway for the current restrictions, which we firmly disagree with.

While we fully support the fight against the coronavirus pandemic, we cannot accept measures to combat the disease being used to restrict basic rights and freedoms. Especially if these then become permanent, which creates a huge risk to our human rights.

Clearly, the pandemic poses major challenges for Belgium, and fighting it requires large-scale health measures to be implemented. Being able to live in safety and good health is a fundamental right, and it is the government’s duty to protect citizens’ health.

However, if the measures taken breach other fundamental rights, the authorities must ensure that these violations do not go beyond what is strictly necessary. In a democracy, citizens should not give away their freedoms easily, especially when the measures being taken are arbitrary and difficult to understand. On the other hand most people feel a sense of involvement and togetherness when they are sure that measures are targeted, proportionate and temporary, and that the rules are the same for everyone.

Any measures must be implemented in the most transparent way possible. Fair and open communication helps to ensure that the public understands why certain measures are introduced and must be respected. Without a clear and open debate on these measures, respect for the rules and their enforcement is likely to be only perceived as a repressive system.

Sanctions and Arbitrariness: Firstly, if people are to penalized for breaking rules, the rules need to be perfectly clear.

However, some people have been sanctioned based on vague legal texts, such as a ministerial order or even a FAQ list from the website of the Ministry of the Interior. Governors and mayors were free to take the law into their own hands in their own jurisdictions. Some of them showed an unlimited imagination, with different regional and local curfews being implemented in the same locations, drones watching over the streets, bans on entering some municipalities and protests and gatherings to support laid-off workers being banned, among others.

In the meantime, more than 200,000 fines were imposed, mostly for minor offences, and on questionable grounds. One thing we know for sure is that this arbitrariness means people are less likely to respect and follow the rules.

Home inspections are the best example of this. The Belgian Constitution provides that the home is “inviolable”. Only a judge can deliver a search warrant, and only in very exceptional cases. These are basic criminal procedural rules. However, both the Minister of Justice and the Minister of the Interior have declared prosecutors competent to issue such authorizations, justified on a case-by-case basis, when someone is caught in the act.

Prosecutors are not independent and may be biased, and the fact they they enjoy such wide discretion in such cases is worrying. Also, the justification of a prosecutor’s decision to issue a search warrant is not likely to be subject to any judicial supervision. How do we know if all the conditions for the police to enter and search someone’s home have been met? If violating someone's home becomes this easy, then how can our right to privacy be respected?

Police acting on their own initiative: Thirdly, when politicians establish such a vague framework for judicial interventions and give more power to governors, mayors and police forces, they encourage them to act on their own initiative. Calling on people to denounce neighbors who do no respect restrictions results in useless interventions and incidents in private homes. The fact the police think they can act without any authorization from a judge, and that politicians support them to do so, is very dangerous and worrying.

These three trends suggest that we don't just have a health crisis on our hands but a democratic crisis as well.

Measures must be temporary and not remain after the crisis

Any measures that do come into force must be targeted, proportionate and temporary. And as soon as the health crisis has been mitigated, any restrictions on our freedoms must be lifted without delay.

If this does not happen, we may come dangerously close to a “shock strategy”, a phenomenon by which governments take advantage of emergency situations to implement measures that the population is prepared to accept in the moment, but that remain in place beyond the end of the crisis.

Many politicians and many in law enforcement have long been dreaming of getting rid of the position of investigating judge, or of extending the use of videoconferences to substitute public hearings in courts. The extension of those temporary measures shows we are on a dangerous path.

This phenomenon has actually occurred recently: Measures implemented after the terrorist attacks led by ISIS are still in force today. Indeed, the length of time someone can be held without charge is still 48 hours, rather than 24 hours, as it used to be. Also, our streets are still being monitored by smart cameras and army soldiers.

The extension of the restriction measures raises concerns

The ministerial order to extend measures until 1 March 2021 raises concerns, not least because it was only publicly announced beforehand. The restrictions of our rights and freedoms cannot be introduced just to be on the safe side. They must be justified, necessary and proportionate. Freedom is the rule and the restriction is the exception. It cannot be the other way around.

Our rights are being violated at an alarming rate. These restrictions are creating a very dangerous climate of arbitrariness, mistrust and denunciations, which results in a sick society. In their place we need solidarity and mutual trust. We need effective measures that respect democratic rights and contribute to protecting them, not measures that put our rights aside.

Authorities must act to ensure the right to health and the right to life, while also protecting other fundamental rights, including the right to privacy, the right to inviolability of the home, but also economic, social and cultural rights. Authorities cannot limit any form of expression and social action for no reason.

Freedom of expression and the right to protest make it possible for those most affected by the pandemic, whose voices tend to be drowned out, to be given the attention they need and deserve. Anyone who puts these rights, and other basic freedoms at risk, must be held to account. 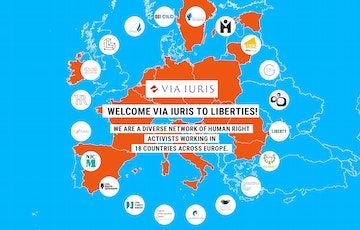