The death of young protester Carlo Giuliani during the Genoa G8 summit in 2001 opened a wound in Italian society that seems impossible to heal.

Piazza Alimonda, Genoa, Italy. July 20, 2001. Clashes between police and protesters have been going on for hours. A young policeman hides in a police vehicle. A young protester picks up a fire extinguisher. A gunshot erupts from inside the vehicle.

The exact course of events is still a mystery: it is unclear whether Placanica directly shot Carlo or if the bullet was deflected. Regardless, the incident has been classified as self-defense. 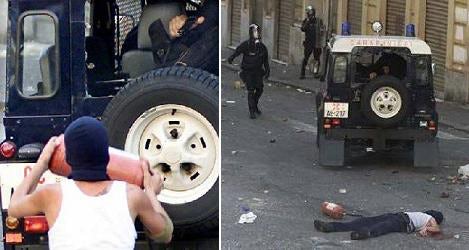 In the middle of one of the biggest manifestation against globalization in the last 20 years, after many clashes between every part of civil society and Italian police, a death occurred. Sadness and disbelief are still strong today, both among those who were present and those who were not. But the memory, carried on by stories and documentaries, remains strong.

To preserve this memory, on July 20, 2016, an event has been organized in that square, Piazza Alimonda, an event that involved cartoonists drawing pictures that were auctioned to help pay for the legal fees of those who, even today, are living through a judicial nightmare linked to those events.

Among these cartoonists, one in particular is very sensitive to issues related to Genoa, Carlo Giuliani, the problem of torture and civil rights in Italy. That artist is Zerocalcare. A post on Facebook in which he advertised the event resulted in the closure of all his accounts by the social network giant because it would have caused a flood of reports of "indecency." 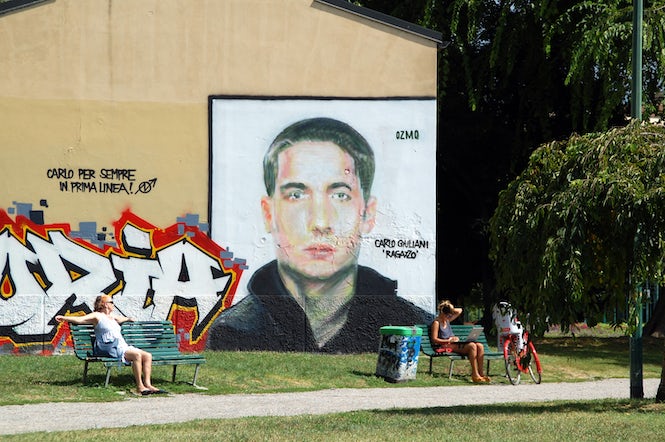 At the same time, the COISP, one of the biggest Italian police unions, tried to hold an event in Piazza Alimonda on the same day of the commemoration for Carlo, but the police headquarters in Genoa banned the event for public order issues. But the COISP didn't give up, organizing a convention at the NH Collection Hotel titled "Fire extinguishers as instruments for peace." The former policeman Mario Placanica participated.

After 15 years, the wound that was opened in Genoa is still fresh and seems impossible to heal. No one wants to take responsibility for what happened, including Carlo Giuliani's death.