Until 2013, a law officially titled Law 241/1990 was the only available tool for Italian citizens to enforce their right to access information held by public authorities (PAs).

The law's inability to guarantee a comprehensive control of public authorities' activities by the wider society prompted a review in 2013, which led to the ratification of the Transparency Decree by the Italian Council of Ministers.

The Transparency Decree partially widened citizens’ right to access information held by PAs, introducing a number of requirements for publication on public websites. Despite this, the requirement of "universal access", a cornerstone for any freedom of information act (FOIA) that allows anyone to ask for any document, was still lacking.

A truly comprehensive FOIA that included this major provision came into force in 2016, largely thanks to the pressure exercised on the government and Parliament by the Foia4Italy movement – an initiative formed by more than 30 Italian civil society organizations.

A stronger right - in theory

By virtue of a real FOIA coming into force, Italy made a historic step forward in the Right to Information Rating, an international ranking on access to information.

This is a judgement on paper, however, and measures only the quality of the legislation. The NGO “Diritto di Sapere” therefore carried out a monitoring analysis on the implementation of the Italian FOIA in order to investigate how PAs answer to requests for effective access in their daily work.

The results were published in the report "Ignorance of State," a title that already shed light on the FOIA's implementation by Italian PAs. 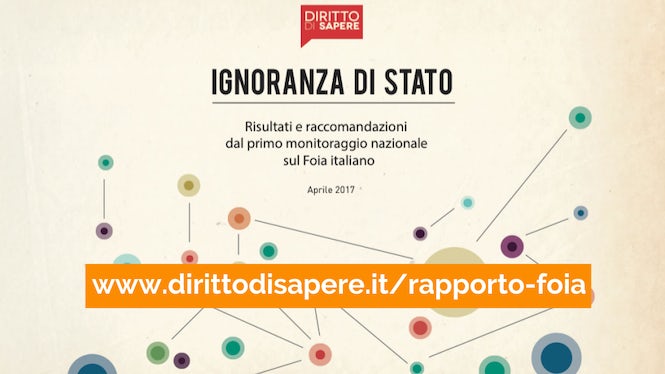 Fifty-six participants, including ordinary citizens (15), journalists (18) and activists of associations (23), took part in the monitoring, and they have collectively sent 800 requests for “universal access” to PAs, with the aim of investigating and shedding light on some issues that affect them and their work closely.

Due to the heterogeneity of the group of participants, the subject of their requests was manifold - among the most frequent, healthcare (48 percent), government spending (18 percent) and migrants (15 percent), but also LGBTI, Roma, and disabled rights (5 percent) and environment (4 percent).

The nature of PAs that have been addressed is therefore linked to the topic and content chosen by the participants for their requests.

These were the findings:

Still much to be done

The findings suggest that the title “Ignorance of State” could not be more appropriate. Though being alarming, the picture that emerges from the monitoring also gives hope for future improvements: if applied/enforced/interpreted with less discretion by the authorities in the coming years, the FOIA could truly enhance the degree of transparency in Italy.

To this end, however, it is necessary to invest resources for training civil servants, which is basic requirement for ensuring compliance with the obligations of the FOIA - the deadline of 30 days, the denial reasons, guidance on how to send a request. Finally, given the novelty of the Italian FOIA, there is room for improvements and amendments.