The purpose of the act is to execute the Constitutional Tribunal's ruling that there is too little oversight over law enforcement operations. Yet the amendment not only does not implement the judgment of the Tribunal, but it also introduces regulations that may reinforce surveillance of the citizens.

The Tribunal specifically ordered the introduction of independent oversight for sharing the data services and the immediate destruction of surveillence material if the content is under professional secrecy. Additionally, the courts were obliged to precisely state the data and techniques of surveillance while granting the permission.

The Constitutional Tribunal stated that a monitored person must be informed about operational activities once they are finished and demanded that the maximum duration of surveillance is defined in legislation.

The ruling has to be implemented within 18 months, hence the new act must be adopted by the legislator by February 2016.

Yet, the draft bill reforming the police from December 2015 will not improve the present situation and will not guarantee execution of the Constitutional Tribunal ruling. Some of the most serious shortcomings of the draft are the fictional oversight over operations and lack of protection of legal confidentiality. The draft in its present form is almost entirely a carbon copy of the one proposed during the previous Parliament.

Moreover, some changes were introduced to the previous draft, for instance: GPS tracking would be allowed without needing prior permission; there is no obligation of immediate destruction of surveillance materials containing information covered by professional confidentiality (such as reporter’s privilege or lawyer-client confidentiality); and operation monitoring may last even for 18 months.

Furthermore, the competence of the police force was extended to cover so-called Internet data, which would be accessible via ITC networks with no obligation to submit an application in each instance.

According to Barbara Grabowska-Moroz, a lawyer at the HFHR, "The scope of online data is wide enough to pose a real threat that they would include, for instance, domains of the websites or even content of messages."

The HFHR believes that such a situation would violate an individual’s rights. At present, the prosecutor’s approval is obligatory in order to collect online data and an individual whose rights are violated may file a complaint. According to the new draft, an individual may be unaware - and may never learn - that his computer was surveilled in such a way.

The proposal introduces fictional control instead of independent control: the forces will be reporting to court annually, but, even when there are errors by the police, destruction of data would not be obligatory.

The draft does not include any requirement to inform citizens that they were subjects of interest and doesn't offer them any opportunity to question the activities against them.

The draft is not compatible with either the ruling of the Constitutional Tribunal or the judgment of the Court of Justice of the European Union. The latter overruled the Data Retention Directive, stressing that police forces should always be obliged to submit an application to a court in order to collect any telecommunication data.

The HFHR published a legal opinion on both the Senate-supported draft from 2015 and the present amendment. It pointed out threats that result from the new law as regards the situation of an individual and protection of their right to privacy. 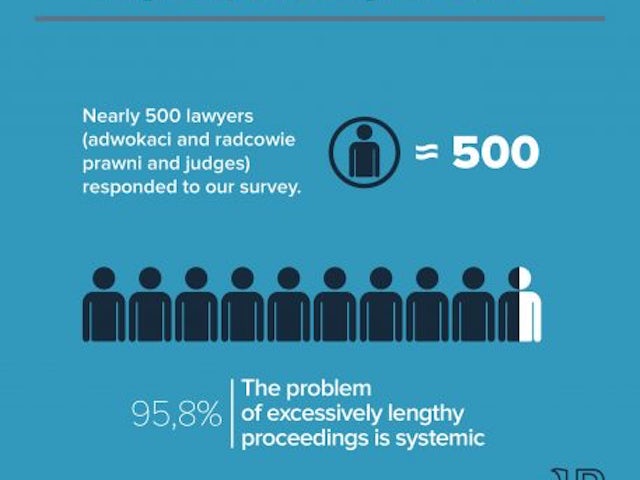 July 22, 2020 • by Polish Helsinki Foundation for Human Rights
In an attempt to assess the changes that have taken place in the justice system in the aftermath of Rutkowski case, the Helsinki Foundation for Human Rights has conducted a survey among lawyers on the excessive length of court proceedings.
You need to accept Functional Preferences Cookies to see this content.