Thanks to several months of hard work, watchdog organization HlidaciPes.org obtained information and evidence that directors and news managers at Czech television station Prima televize have been pushing directives to paint refugees as a threat to Europe.

The findings of HlidaciPes.org are echoed by a report last winter by the Czech Council for TV and Radio Broadcasting, which called the network's reporting "oblivious" to the real situation of refugees.

Prima televize is an influential channel: it currently has the third-largest audience in Czechia, and the all-day audience share among the "15+" demographic is 23 percent.

"The atmosphere between the editorial staff is very tense. Most editors are aware that there are not many other similar job opportunities, thus following the setting line and accepting the conditions. Resistance is not accepted," said one unnamed member of the editorial staff, according to HlidaciPes.org.

The basic message of the meeting, held in September 2015, was clear: it is necessary to take a definitive stance on the refugee crisis that presents it as a threat, to play into fears of Islamization, and to promote the underlying message of not wanting refugees in Europe, and in Czechia in particular.

It was also made clear to reporters that they must identify with this position and style their reports to fit it; those not ready to accept this were told they were no longer welcome at Prima.

Some editors complained that this policy was a clear contradiction of journalistic standards, but management rejected this and said such standards and objectivity was to be suspended for at least the next few months. 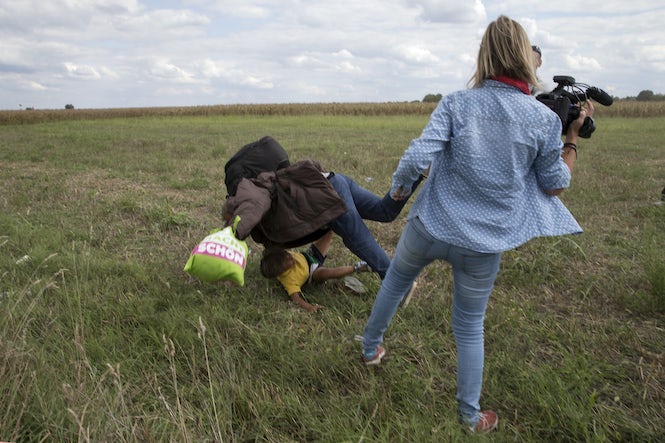 After this meeting, one of the editors of Prima televize resigned, and a second editor left this spring because of the "migration regulation."

FTV Prima, the parent company of Prima televize, denied any loosening of journalistic standards and insisted that the meeting was held to devise a unified presentation strategy for the sake of viewers.

"The FTV Prima news operates with an editorial approach based on independent descriptions of events. The aim of the September editorial meeting was to agree on a way to help the viewer understand [the refugee crisis], and as well to have a consistent editorial approach of ongoing refugee issues. Different opinions were heard at this meeting," read a statement from FTV Prima in response to HlidaciPes.org's allegations.

The network also presented what it thought was evidence of their balanced news reports, citing the analysis conducted by the Council for TV and Radio Broadcasting last winter.

This report, however, says the contrary: "Broadcasting as a whole was too oblivious to the situation of refugees themselves and was portraying them more as a source of problems for Europeans. This significantly Eurocentric view may implicitly reinforce negative (anti-immigrant) attitudes of the Czech public."