Two cases of police destroying press material at a TTIP protest are the latest in a disturbing trend of police action against the freedom of expression in Belgium. The Belgian League of Human Rights demands a serious and independent investigation into these police abuses against media members.

The first case concerns the misadventures of a ZIN TV crew, a Web TV site for citizen participation in cultural, educational and informative events, during an anti-TTIP demonstration on October 15.

The police forced a cameraman to erase everything he had shot that day. According ZIN TV, some of these images showed "the humiliation inflicted by the police on demonstrators perceived as ‘unemployed’ and ‘dirty leftists’ with nothing better to do than to annoy the population."

Also, according to the statement, "the contemptuous remarks of the police commander who was in charge of arrests" and "threats of tear gas against protesters" were on the footage.

Journalist's arrest for nothing

The second case concerns an Italian journalist with membership in the Fotoreporter Professionisti Associati. He went to cover the festive event and was nearby when the police intervention occurred.

His work done by that point, he decided to leave rather than become more involved, but was arrested two blocks away by three officers who asked him to identify himself. Although the journalist told them that he was a journalist and presented his press card, the officers seized the memory card from his camera.

He was then put in a van without being given a reason for his arrest and brought to the central police station for Brussels-Ixelles. He stayed 36 hours there – five of which were spent in the cold of the yard – and was released only after the Italian consulate and an Italian European parliamentarian confirmed his status as a journalist.

The police gave him no explanation for his arrest.

We have the right to film police

The Belgian League of Human Rights (LDH) sees in these two cases, and in the testimonials it receives on the observatory site of police violence, that these incidents are unfortunately not isolated. The site has received several reports of police refusing, preventing or even filing a complaint against citizens attempting to film a police intervention. The misadventure of the former justice of peace Jan Nolf in January is one example among many.

This illegal behavior now seems to also affect members of the press. In this regard, it is important to point out that, by seizing a camera's memory card from a journalist, the police violate both the right of the press to protect sources of information and Article 10 of the European Convention on Human Rights, which protects freedom of expression and freedom of the press.

LDH therefore considers it important to remind both citizens and journalists – with or without a press card – of a quote from the book "What are your rights when you face the police,” by Mathieu Beys:

"There is no general prohibition against taking photos or filming the actions of the police. It is legitimate for citizens and journalists to film or photograph police interventions, whether to inform or gather evidence of the sequence of events. [...] Being photographed or filmed during their interventions is not an embarrassment for policemen anxious to respect professional ethics."

According to the European Commission for Democracy through Law (the "Venice Commission"):

"Participants and third persons should not be prevented from taking photos or filming police operations and any request to give to the police videos or images stored numerically should first be approved by a court."

By seizing equipment without a valid reason or deleting images, the police commit theft and become criminals.

The League of Human Rights demands a serious and independent investigation into the allegations of ZIN TV and the Italian journalist. Those responsible must be identified and, if the facts are established, sanctioned.

The fact that Interior Minister Jan Jambon (NV-A) stated that he is considering a ban on taking pictures of the police officers out of concern for their safety is a dangerous signal for democracy. The prohibition of private filming or taking pictures of the police by demonstrators who have not committed any crime would be a return to censorship and a serious attack on freedom of expression. 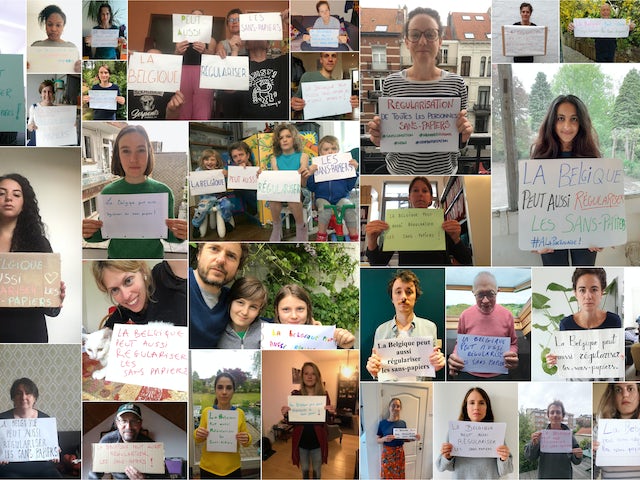