The mask wearing debate in the USA is dominated by ideology and political identity. A big slice of hard-core US anti-maskers are probably authoritarians. Politicians and media outlets with authoritarian agendas in Europe may be tempted to turn the mask debate into a culture war here.

[Much of this article is based on research published in 'Countering Populist Authoritarians: Where their support comes from and how to reverse their success', by the author.]

The ideological explanations that committed anti-maskers in the USA give for refusing to wear face coverings suggest that a substantial slice of them are not really concerned about freedom. Many hardcore anti-maskers seem to oppose face coverings because this sits well with their authoritarian attitudes; namely, a desire to maintain damaging traditions and social inequality.

This is not to say that everyone who has reservations about wearing a mask is authoritarian. Anti-maskers in Europe appear to include the far right, but protestors are still quite mixed. Those suspicious of government overreach may see masks, along with creeping mass surveillance, as yet another measure designed to limit individual freedoms. There are many people who are sceptical of wearing a mask for practical or social reasons. For example, because they've received conflicting official advice about their efficacy, because they're uncomfortable (especially for strenuous physical activities) or make social interaction and communication difficult.

Reports from the USA setting out the reasons given by ideologically-motivated anti-maskers suggest that a substantial slice of hardcore anti-maskers are authoritarians. Demographic research from the USA provides some support for this, finding that anti-maskers are more likely to be male Republican supporters. While being a Republican does not necessarily equate with holding authoritarian opinions, there is ample evidence that those with authoritarian attitudes were much more likely to support Trump in the 2016 presidential election. It's plausible that those surveyed so close to an election who intend to vote for Trump will self-identify as Republican. On top of this, men also outnumber women among those with authoritarian attitudes.

By authoritarian attitudes I mean being opposed to things like equality for minorities and civil liberties, and being in favour of taking power from independent institutions and concentrating them in the hands of a strong-man leader. There are two types of authoritarian: inegalitarians and traditionalists. People with these worldviews are more likely to support parties and candidates with authoritarian policies.

Inegalitarians support the maintenance of traditional social and economic hierarchies that place God/religion above humanity, man above woman, whites above non-whites, straights above gays, adults above children and humanity above nature. Inegalitarians are sensitive to attempts to challenge these hierarchies - such as improvements in equality for women, ethnic minorities or other marginalised groups. Traditionalists are concerned about maintaining social cohesion. They are sensitive to threats to security (including to health), economic stability and changes to traditional cultural rules. Inegalitarians and traditionalists react to perceived threats by more strongly endorsing authoritarian attitudes.

Reports from the USA on more ideologically-motivated anti-maskers shows they tend to advance the following reasons, which are consistent with their authoritarian leanings.

In the USA at least, masks have become a political issue, with Trump supporters seemingly influenced by the President's largely negative attitude. Adopting a position on an issue on the basis that this is in line with your political identity is not something particular to authoritarians. Research on social identity theory suggests that when people identify with a particular political group, their opinions will be influenced by what group leaders decide are group norms. However, in the USA committed anti-maskers express the view that there is a conspiracy to exaggerate the dangers of the pandemic. Sometimes it's a conspiracy to make the President look bad and sometimes it's a conspiracy by big pharma cashing in on a vaccine.

Research suggests that inegalitarians and traditionalists are prone to endorsing conspiracy theories and are suspicious of state institutions and officialdom. In their view, legitimate power in society has been hijacked by a 'liberal elite' that will destroy society or stand by while other 'threatening' groups (e.g. feminists and ethnic minorities) do so. As such, authoritarians are more likely to mistrust experts, civil servants and politicians from the traditional mainstream.

Conspiracy theories provide simplistic solutions to complicated problems. They offer a coping strategy for inegalitarians and traditionalists who will be triggered by actual or perceived threats associated with the pandemic.

On the surface, this seems to be about individual freedoms, which is not a high priority for authoritarians. But if you dig deeper, this argument is not really about making people in society as free as possible. Freedom doesn't mean the liberty to do whatever you want. Because that would mean everyone has a right to do things that would encroach on other peoples' liberty. Me parking my car on your lawn is not an exercise of freedom, because I just took away your freedom to use your property.

Freedom is about giving everyone in society choices over how to live their lives. For everyone in society to be free each of us has to stay within the boundaries of our own freedom and not encroach on the liberties of others. Not wearing a mask takes away the freedoms of those around us, because it threatens their health and increases the likelihood of more shutdowns.

This argument is really about preserving traditions. Either the tradition that we don't wear face coverings. Or a tradition that government should just stay out of peoples' lives as much as possible. This is what makes this argument attractive to traditionalists, who are not usually fans of individual liberties.

Remember, anti-maskers in the USA are more likely to be men. This objection is also related to tradition. There is evidence that men with more traditional attitudes about masculinity place greater importance on physical strength. And research in the USA suggests that men are more likely than women to feel that wearing a mask is shameful and a sign of weakness. If wearing a mask threatens traditional conceptions of masculinity one would expect traditionalists to strongly oppose it.

Inegalitarians probably have similar concerns. The traditional place of men in the social hierarchy is relatively higher than that of women and other historically marginalised (in their eyes, 'weaker') groups. And superior strength is one of the characteristics that inegalitarians are likely to think plays a role in giving them their higher place in that hierarchy. Inegalitarians will oppose any rules that undermine traditional social hierarchies: either by making them look weak, or by elevating the status of marginalised groups to the point that those higher up the ladder need to adjust their behaviour to accommodate them.

Inegalitarians are also known to be low on empathy and are prone to zero-sum thinking - meaning that if anyone lower in the hierarchy seems to be improving their position, inegalitarians will think that they are losing something in return. The lack of empathy and zero-sum thinking are evident in pronouncements by anti-maskers. For example, that older people and those with existing health problems, 'were going to die anyway', and that 'vulnerable' groups should isolate themselves rather than impose mask-wearing on others.

Masks are bad for my health and/or don't work

Committed anti-maskers will often accompany their ideological arguments with empirical evidence to justify their stance. In particular, the incorrect claim that masks are ineffective and/or are harmful to their own health. Although it seems that humans in general tend to seek out information that justifies their beliefs (confirmation bias), traditionalists and inegalitarians are more likely than others to reject information that conflicts with their views.

So how should we debate on masks?

Media reports suggest that anti-mask movements in European countries were growing during the summer. It seems that authoritarians have not yet hijacked the mask debate here. But what if they do?

There's probably little point in trying to persuade inegalitarians and traditionalists to change their mind on masks as they will be difficult to sway. Rather, it's more fruitful to speak to those with conflicted views, who have misgivings about masks but at the same time don't want to harm people in their communities but. Respectful dialogue is much more effective than lecturing, and accusing people of being selfish or stupid is counterproductive. One approach could be to reframe the notion of freedom in public debate. We should move away from the idea of freedom as merely the absence of restrictions and towards the idea of freedom as giving more people in society greater choice. For an example of how this might look, check out our piece here. Some research supports this idea, finding that messages that appeal to peoples' concerns for their community (compared to 'you', 'your family' or 'your country') were more effective in getting people to take precautions against the pandemic, including wearing a mask.

November 17, 2020 • by LibertiesEU
What is a contact-tracing app? Do they follow me on it? Who sees the data collected by the app? 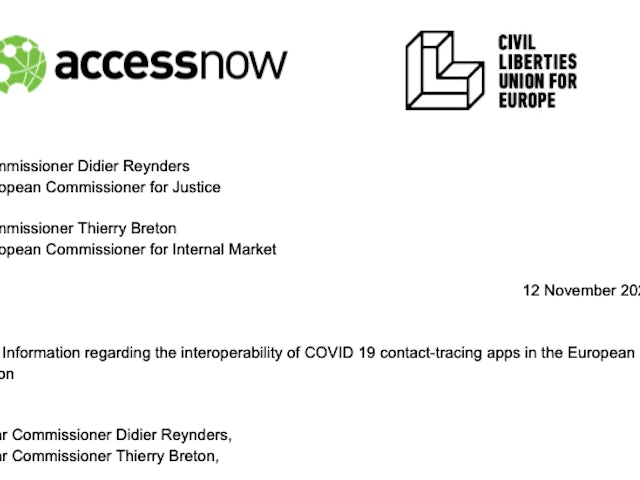 November 12, 2020 • by Eva Simon, LibertiesEU
Liberties and Access Now today sent a letter to the European Commission to inquire about the interoperability system for COVID-19 contact-tracing applications that was set up by the Commission.