This case regards a Pakistani youth who had to sue the Spanish state for the identity check performed by a National Police agent with the argument that he was “not going to stop a German.”

Both organizations presenting this intervention believed that it was important to inform the Court of the measures that the Spanish state should be urged to adopt in order to prevent further discriminatory police actions like the one denounced.

All of these measures have been recommended by other European and international human rights organizations and have been proven to work in practice in several police forces, both in Spain and in other European countries.

The Spanish law that regulates police authority to perform identification checks (Ley de Seguridad Ciudadana) is inadequate because it does not contain sufficient safeguards against racial profiling by the police.

Firstly, the law should include a definition and prohibition of this type of discriminatory police actions. Second, and in accordance to the jurisprudence of the European Court of Human Rights, reasonable suspicion of an actual offense or crime should be a prerequisite for performing identity checks or stop-and-search procedures. 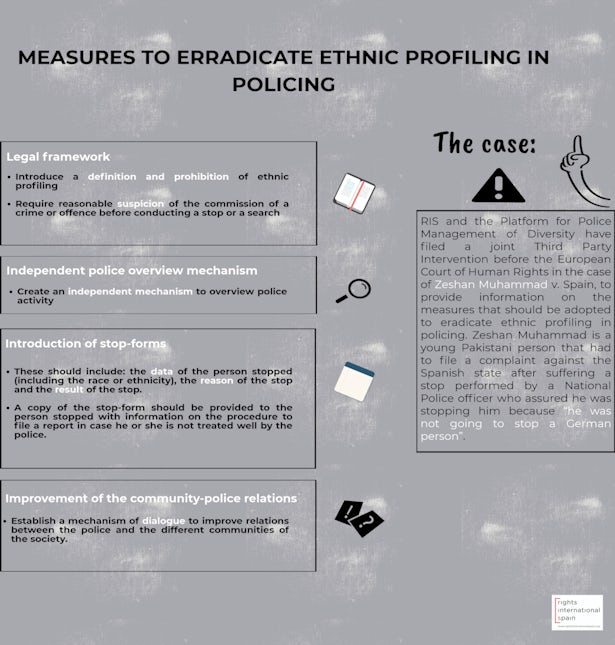 Police officers should therefore be required to observe objective criteria instead of stereotypes regarding people's racial background.

Another key measure to prevent racial profiling is the use of stop-forms that must be filled by agents every time they perform an identity check. These forms should contain personal data (including ethnicity and race) of the person checked, the reason that led the agent to perform the check, and the result of the latter (i.e. whether it resulted in the discovery of a crime).

In addition, a copy of the form should be handed to the person checked with information on the means of denunciation in case of ill-treatment by the police. This protects the rights of the person checked and allows measuring how disproportionately do police actions affect certain collectives, as well as the efficacy of police checks. Experience has demonstrated that this tool serves to reduce ethnic profiling while improving police efficacy – the more agents are guided by objective criteria, the less discrimination there is and the more crimes are discovered.

One of Spain's historic debts to human rights is the lack of a real independent mechanism to supervise police actions and receive complaints. These mechanisms play a very important role today in prevention, investigation, and healing of human rights violations committed by police agents, such as discriminatory actions (or the breach of the prohibition of torture).

August 18, 2020 • by Julia Betegh, LibertiesEU
Catalan independence campaigners are suspected to have been targeted by government services using spyware, which is allegedly only sold to governments for the purpose of surveilling criminals and terrorists.