Following the recent attacks in Paris and the dismantling of a terrorist cell in Belgium, the Belgian government has decided to take various measures to strengthen the security of citizens during this period of uncertainty. The government has announced 12 measures to improve the effectiveness of the fight against radicalism and terrorism. The League of Human Rights (LDH) critically examines some of these measures to ensure that fundamental freedoms do not become collateral damage in the legitimate struggle against terrorism.

Extending the use of special investigative methods

Belgium, like neighboring states, has significantly expanded its legislative framework in recent years to fight against serious crime. It is at the point now that an expansion of this arsenal does not seem appropriate at this stage (and was also not requested by the competent law enforcement forces in the matter), with the notable exception of the extension of legislation allowing wiretapping in cases concerning incitement, recruitment and training for terrorism. In this respect, an extension of the legislation regarding such offenses seems logical. However, recent events must not allow further exceptions to the law.

Expanding opportunities for deprivation of citizenship

This is undoubtedly the worst response. It may indeed create two separate categories of Belgian citizens: those whose nationality can never be removed; and those at risk of losing it at any time. This measure contradicts the government's calls of "living together" and will cause unequal treatment of citizens based on their origins, making "new Belgians" second-class citizens. On the contrary, inclusion is the only hope to answer the excesses (abuses?) we witness, not exclusion.

LDH insists that these measures must be taken in respect of the rights of litigants and legal procedures. In other words, while the government provides that such measures may be taken by the security minister on the advice of the Federal Prosecutor's Office, LDH thinks that such measures must be preceded by a careful examination from an independent and impartial judge (such as an investigating judge) and followed by an opportunity for concerned citizens to officially appeal to the investigating authorities to assess the legitimacy of the decision and to avoid arbitrary decision making.

Exchange of information and capacity to analyze state security

LDH noted that the state and the security services already have very extended databases of information. The anti-terror operation last week suggests that the issue of information for law enforcement is not the real issue, since the persons covered by this operation were known and monitored. LDH therefore questions the need for further expansion, which is not without risk. In this respect, LDH wishes that, if enlargement were to materialize, the government has to be particularly attentive to respecting the principle of confidentiality of investigations, as well as to the proportionality of the measure with regard to respect for privacy. It would be paradoxical in this struggle against those who seriously question the values of democracy, that privacy, a fundamental value in a democracy, becomes a collateral victim by taking measures intrusive to the values of democracy.

The fight against radicalism in prisons

LDH, like many international organizations, has already pointed out the glaring lack of willingness of the government to put in place measures to promote the education and rehabilitation of prisoners. Prison is a particularly problematic and criminogenic place that promotes the radicalization of some prisoners. It is completely counterproductive to fight radicalization in prisons only by strengthening security measures. The fight against radicalism can't be done without a wider reflection on the role and functioning of the prison world. The approach focused only on security and demonstrated total inefficiency in many cases, so it is imperative to try a different approach.

LDH disapproves of this measure, which is neither necessary nor useful. The army does not belong in the streets of our cities because that is simply not its role in a democracy. Indeed, it should intervene in war, but military forces, unlike the police, are not trained to maintain order and public peace and defend democracy and human rights. It is up to the police, who have proven their effectiveness in recent days, to ensure the security of citizens and the respect for fundamental rights. The army provides no added value in the management of this crisis, but its presence reinforces the sense of insecurity in our cities without increasing security. If this measure is to be confirmed, however, it is imperative to do it for a short, predefined time and accompanied by objective information to citizens about the status of this threat.

More generally, LDH wishes to draw the government's attention to two paradoxical situations that should be taken into consideration during this time of crisis:

1.The Paris events led to an extraordinary mobilization by citizens to overwhelmingly express their commitment to freedom of expression. It would be difficult to understand that measures are taken to reduce the freedom of expression (generally and on the Internet in particular). If greater vigilance on the web is useful and necessary, it can't be turned into censorship.

2. For a consistent and comprehensive approach to terrorism, it would useful for the federal government to address the issue of arms sales in Belgium. It is indeed important to remember that Saudi Arabia and Qatar are among the best customers in our country and it is common knowledge that these states finance jihadist movements in Syria and Iraq.

In conclusion, LDH calls for greater vigilance on the necessity, proportionality and potentially draconian effects of some of these anti-terrorism measures. LDH emphasizes that the proposed measures are only short term and will not resolve in any way the problem of terrorism and radicalism. In order to effectively fight these, it is essential to consider much more difficult issues that affect education, employment, discrimination and international politics. It requires measures of a greater complexity than responses focused on security because these measures fight only the symptoms and not the disease.

The fight against terrorism is also a fight for safeguarding the fundamental values of democracy. If certain fundamental freedoms were to be suppressed during this crisis, we should therefore conclude that the terrorists have won. 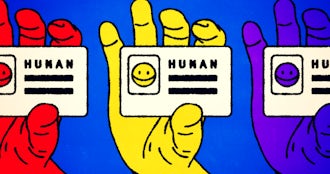 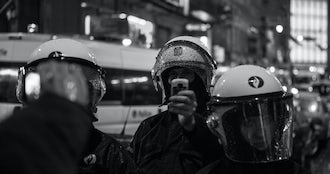